Dazzle Me video slot is a fairly new creation from Net Entertainment and features five separate reels with seventy six pay lines. Two of the reels have three rows, another two reels have four rows and then one reel has five rows.

The online casino slot offers an auto play feature where the reels will spin for a certain amount of predetermined spins and a max bet function where the maximum bet can be automatically placed. This Net Entertainment online slot game has game settings that are adjustable by clicking on icons at the bottom left hand corner of the screen. Volume control, game history, the quick spin feature and more can easily be accessed.

The Dazzle Me reels are set on a background of a glittering sun dazzling on an ocean. The reels display symbols that include both themed symbols and some classic symbols like sevens and bells, you can also find these sevens and bells in many slots after clicking on this link. The themed symbols are all types of gems including sapphires; rubies; amethysts; emeralds and diamonds. The sevens and bells are higher valued symbols and pay out amounts of up to 200 coins and 100 coins respectively when five land consecutively on a pay line. Rubies and amethysts pay out up to 30 coins when appearing consecutively on a pay line and the sapphires and emeralds pay out up to 20 coins.

There are up to ten bet levels of which the coin value range from a minimum denomination of 0.01 up to the maximum denomination of 1.00. All Dazzle Me wins pay from the furthest left reel towards the right. Three or more matching symbols are need to land consecutively on a pay line in order to pay out an amount set out in the pay table. Multiple winning combinations on multiple pay lines are paid out. 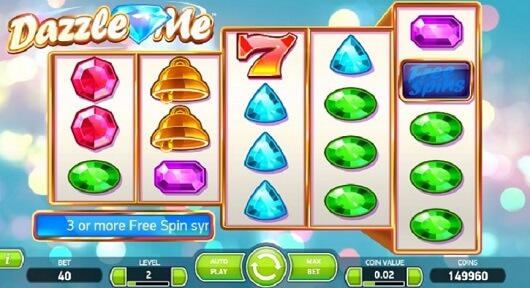 Once the free spins bonus round is activated the linked reels feature will enable. This will happen at the beginning of every free spin. Two to four of the first, second, third and fourth reels will become linked which means that the two or more reels will become exact copies of each other.