Wicked Riches slot is actually fully known as The Wizard of Oz Wicked Riches. Centred on the wicked witch from the Wizard of Oz story, this game has a slightly darker feel than other Wizard of Oz games. Thirty paylines are all fixed but wagering has been made easy with only five choices at the bottom of the reels. The five reels also only have three symbols per reel, making Wicked Riches slot a simple one to work out. This is a game that will not intimidate beginners. Advanced players however may be looking for something a bit more in terms of special features.

Wicked Riches slot is a simple slot to look at. It does not have very many symbols on the screen and those that are there are simply drawn and not in 3D. The reels have been designed to look like actual mechanical reels which could be found on all of the old school brick and mortar slot machines. Four jackpots sit above the reels which are set in a dark purple forest somewhere in the Land of Oz. All player info and betting options are laid out very clearly at the bottom of the reels in no nonsense buttons. The soundtrack is typical online slots machine sounds until the rather crazy sounding witch chimes in. 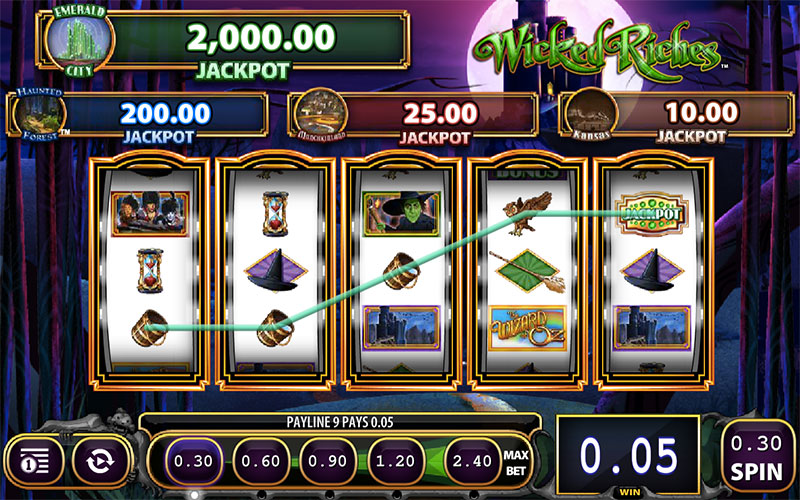 All of the symbols in Wicked Riches slot are theme based and have to do with the green skinned lunatic witch. The symbols are very small, and can be quite difficult to see, especially on a smaller screen. The lower paying symbols are a bucket of water, the witch’s hourglass and her flying owl. These will award you with eight to ten coins for five of them in a row when playing with max bet. Next in line is her broom, her hat and her bat filled castle.

If the flying monkey symbol appears anywhere on the third reel the witch will cackle at you and release her flying monkeys. These will fly at the reels, swiping at random symbols and turning them wild. The spin will then be recalculated with the new wilds in place. This is essentially a shifting wild feature. The feature happens quite often and can also be triggered during the free spins round.

Three or more Wicked Riches Bonus symbols across the reels will trigger the free spins round. Here you will be granted with eight free spins that are not re triggerable. During the round a multiplier appears at the top of the screen, changing with each spin. At the end of the eight spins the current multiplier gets applied to your win.

Randomly after any spin the tornado feature can trigger. This is the link to the four jackpots at the top of the screen. One of the jackpots will be selected by the game, and will hide in a choice of four sheds. Each shed holds a prize, and one of them contains the jackpot.