Detective style slot games are not a new experience in this industry but this Crime Scene slot from NetEnt doesn’t quite fall into that genre of gaming, offering instead a rather unique approach in which the aftermath of such detective work is explored, in rather gritty detail. Indeed players will be taken to the location of some sort of criminal act and have to use the clue on the reels to help solve the case presented to them. Definitely a unique atmosphere about it this online slot still sports some decent graphics and a fun atmosphere in regard to the theme constructed on the reels present.

Speaking of the reels and just how present they actually are, this slot has 5 of them and across these there are a set of 15 fixed pay lines that the players will end up relying on to help them with their winning combinations. Not to outdone NetEnt have included a range of betting options alongside these fixed pay lines meaning that there is still a degree of betting choice regarding this slot for the players. This Crime Scene game also carries with it some largely relatable bonuses and features, which include sticky Wilds and even a themed bonus game in which players really get hands on to help solve whatever really happened on the reels of this slot.

Exploring the Crime Scene on the Reels

The setup and design of this rather unique theme choice is actually fairly straightforward and easily interpreted by the players as they arrive at the 5 reels in question. First thing these players will notice is that there is a Crime Scene investigation banner and tape across the top of the reels, adding to a backdrop of a rather dodgy looking neighbourhood. Players will also note that the betting options and other necessary buttons are neatly laid out beneath the reels, easily interpretable and engaging, making setup and play of this slot game from NetEnt a venerable breeze. All in all, though the graphics of this slot game may not be much to write home about the theme is still well portrayed and given the chosen atmosphere may be worth a spin. 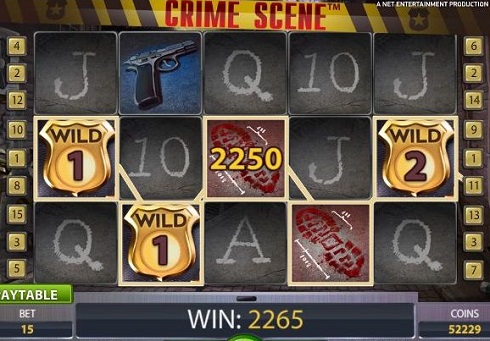 The concrete theme paraphernalia involved with a slot game such as this actually revolve around the different symbols employed on the reels and represent the various aspects of an actual Crime Scene. These symbols include a bloody footprint, some forensic gear like UV lights and goggles, a neat looking silver case and even what one could only assume to be the murder weapon involved in this case. A fun thing NetEnt did with regard to these symbols is include the playing card symbols but done up in chalk, almost Crime Scene styled.

Players looking for slightly more intense action will also come across this Crime Scene slot’s Wild symbols which can become sticky for a couple of spins and also net players a 3 times bonus when it is used in conjunction with other symbols to form a combination. The bonus game of this slot on the other hand triggers through the fingerprint symbols and then takes players to a game screen with some 30 case folders and a rather lucrative pick’em bonus feature.